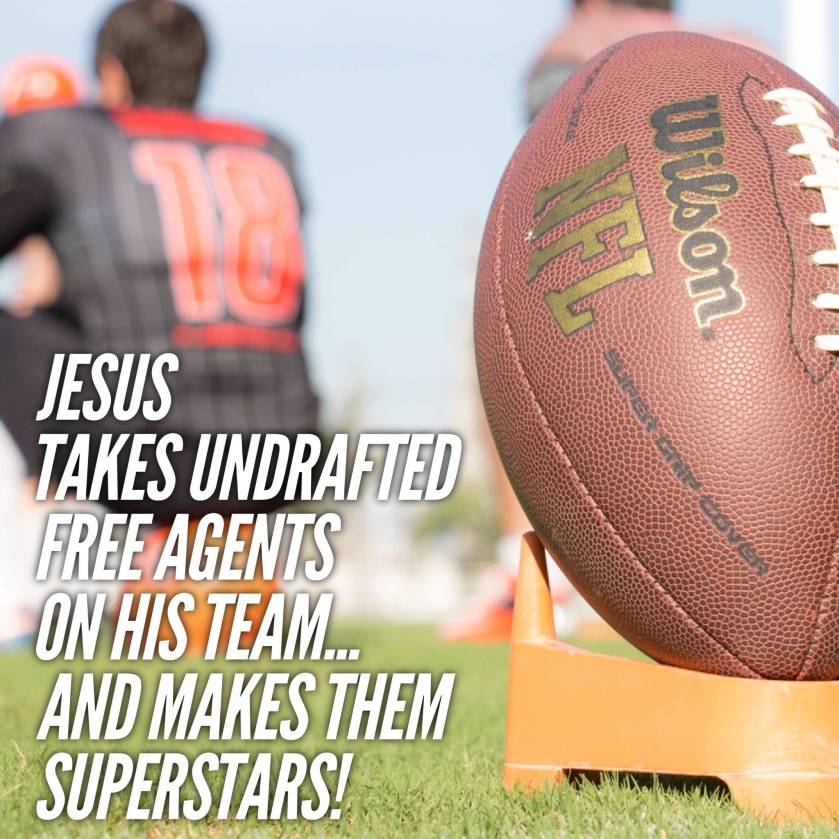 As a kid, I was always small for my age.  So, inevitably, when it came to sports I was also typically picked last.  It feels pretty bad to be standing there as two people pick who they want on their team… to watch the number of people standing around you dwindling… and just hoping that you won’t be the very last one chosen.  But it feels even worse when they have picked everyone except you and one team leader says to the other, “You can have him.”  Yeah, been there, done that.

So, I suppose I’ve always had a heart for the underdogs in life.  I know what it’s like to be picked last, and even not selected at all.

An NFL Kind Of Guy

Oh, don’t cry for me. I wasn’t scarred.  It’s not like I chose to avoid sports altogether.  I just realized I’m better at watching someone else play than playing myself.  And I really enjoy following NFL football. (No, this is not a post exclusively about football. I have a point to make and some encouragement to share.)

As I write this post, the SuperBowl is coming up this Sunday, and I know that I will be deprived of my weekly fix for about si months.  But at least I know the NFL Draft is coming in April.  And hopefully, that will give me enough to hold me over till September.

The NFL Draft is a crazy thing.  Teams are betting that they have scouted players well enough to sign them and give them massive contracts to play football at the level expected of them.  But the history of the NFL shows that plenty of first-round draft picks never panned out.

And then there are those players who were drafted in later rounds that turned out to be superstars… like a guy you may or may not have heard of by the name of Tom Brady.  Someone thought he was good enough to draft, but certainly not good enough to take in the first round.  Even though he worked out as a good choice, someone probably ought to either get fired or get a bonus for picking him in a later round.

Of course, there are players who came into the NFL as undrafted free agents.  In other words, no one was willing to take a chance on them by drafting them.  But these guys have turned out to be superstars…. people like Tony Romeo, Antonio Gates, Arian Foster, Wes Welker, Adam Vinatieri, Kurt Warner and Priest Holmes.  If you watch football at all, you probably recognize those names as great players.  Players who no one wanted initially.  They were the guys standing there like me… waiting and wanting to be picked… but left standing there with one team saying, “You can have him if you want.”  Whose laughing now?

Interestingly, Jesus picked twelve undrafted free agents Himself.  Some Biblical scholars believe the disciples were all in their teens and twenties with John the Beloved being the youngest at about 16 years old and Peter possibly being the oldest at approximately 26 years of age.  That may seem young to you, and that Jesus was picking His team before the “disciple draft,” but the truth is that most rabbis of that time chose the boys they would train to be leaders in the community and in the Jewish religion by the time they were 12 or 13 years of age.  And if you didn’t get “drafted” by a great rabbi, you simply went on back to pursue your family’s business.

So, if the guys Jesus picked were 16 to 26 years old, they were certainly passed up by other rabbis.  But that didn’t stop Jesus from choosing them.  His Father had scouted them and given Jesus the nod to pick each of them.

Can you imagine their delight in being picked after the draft?  And what they may not have realized originally is that they were being picked for the greatest team of all times.  They may have realized that Jesus was a great coach initially, but they certainly didn’t get how big of an impact He would make on them and they would make on this world.

For the record, Jesus still signs undrafted free agents today.  You may have been passed up by a lot of people for a lot of things.  Rest assured, God sees value in you.  God sees talent and ability in you.  God sees a superstar in you just waiting to be developed and allowed to shine.

If you’ll sign with His team… get into His system… follow His plan for you… then one day you will take the field and everyone else who passed on you will sit back drop-jawed in amazement at all you are capable of accomplishing.  They will start talking about trying to trade to get you.  I say you should stick with the One who saw the potential in you first and took a chance on you.  You won’t regret it!