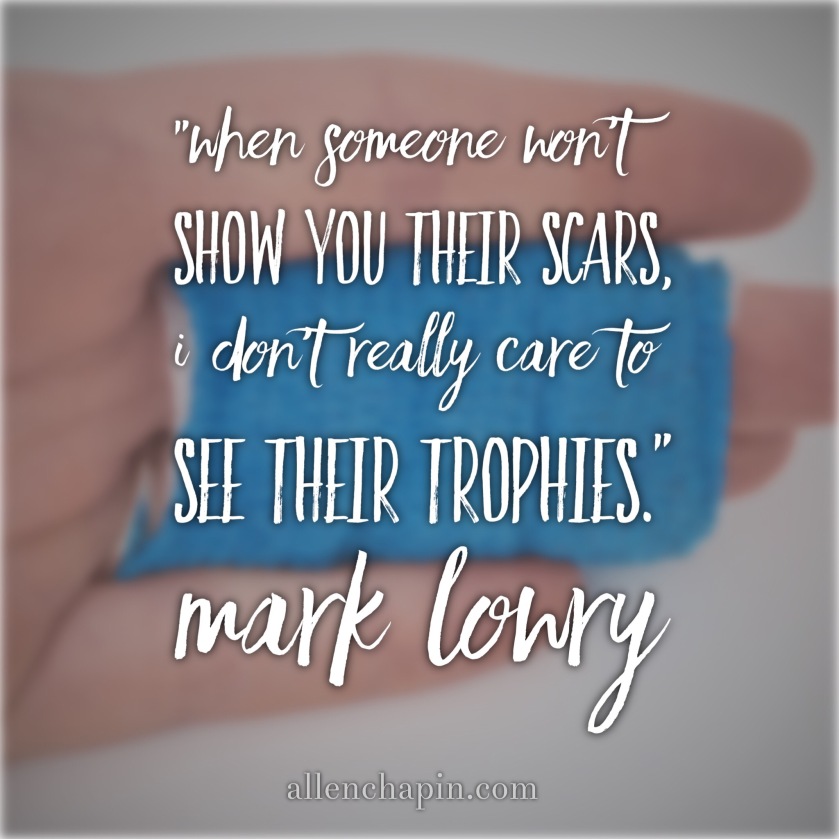 I laughed till I cried and could hardly catch my breath.  Three or four of us older teenagers were helping our youth pastor build a float to represent our church in a local parade. Someone hurt themselves a little, and someone else told a story of a time when they got hurt.  We each took a turn telling a story about getting hurt.  Then Mike told a story about getting hurt that topped them all.

Not to be outdone… because now this was a competitive display of our manhood… we each began pulling out our best injury stories. There were lots of “ohhhhh’s” and “no way’s.”  And after each person told their next story, Mike would tell one of his… usually rolling up a pant leg or lifting a sleeve to show us the scar related to that story.  This got us laughing.  As it went on, we all ran out of stories, and Mike just kept telling his till we laughed harder and harder.

That night, building that float together and telling stories of injuries we had survived… Mike winning the manhood trophy, of course… drew us all together.  Looking back, I get it.  The greatest inspirational stories… the ones that open our heart to hear what others have to say… the ones that draw us to them… the ones that make us want to know them… are the stories which involve someone overcoming injury and adversity.  It’s when they show us their scars… because scars prove they know what it’s like to be hurt, and they also prove that healing can take place.

I love watching the Olympics.  And I can be planning to cheer for one person, but then the network hosting the airing will show a video telling of a different athlete’s trials they had to overcome to make it to the Olympics.  Suddenly, I’m drawn to that person… caught up in their story as it unfolds… wanting them to succeed and win.  And when they do, it’s all the sweeter because I know what they had to go through to win that medal.  Their scars made me celebrate their victory.

Mark Lowry said once, “When someone won’t show you their scars, I don’t really care to see their trophies.”  You see, it’s not the successes people achieve which inspire us and engage us.  It is the scars they show us which they got on the way to winning the trophy.  It says to us that we may get hurt, but we will heal… and we can even go on to win.

Lots of people hate on the disciple known as “doubting Thomas” because he refused to believe Jesus had risen from the dead till he saw the scars, but he had not been there when Jesus showed Himself alive to the disciples the first time.  In my opinion, his response was totally normal to the human condition.  Yet when he saw the scars, it gave him hope… caused him to believe… inspired him… motivated him.

It’s not so different today, is it?  People want hope.  People want to believe.  But they need to see some scars.  They need to hear someone say that they got hurt, but they also healed.  Once they see our scars, they will be able to believe that they, too, can heal from their hurts in life.

So let’s pull down our defenses some today.  Let’s be real… genuine… authentic… vulnerable… a little less than perfect.  Let’s do like Mike, and keep showing our scars till everyone else listening to us thinks, “Hey, my life’s not that bad.  And they healed up, maybe I will, too.”  When we do, our trophies will actually shine a little brighter in their eyes, and we will inspire them to pursue victory for themselves!