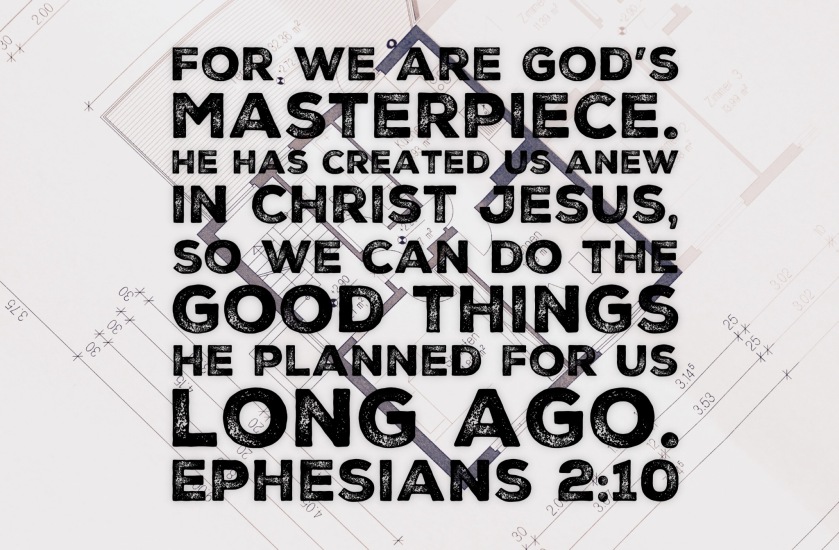 One of my favorite lines from a movie is one of the most ridiculous lines ever.  It comes from the animated movie Turbo about a snail who wants to be a racer.  An elderly woman who gets on board with the taco vendor who wants to help the nitro-infused snail race says to him, “You got a plan, Taco Man?”

And it instantly reminds me of George Peppard’s character, Hannibal Smith, on the A-Team, who would always say, “I love it when a plan comes together!”

How do I know?  Because Ephesians 2:10 tells us that God made you a masterpiece so that you can do the good things He planned for you long ago. How long ago?

A Long Time Ago…

A LONG time ago!  Like before you were born…  Like before the world was created…  Like before time was even kickstarted.  Psalm 139:16 tells us, “Every day of [your] life was recorded in [His] book.  Every moment was laid out before a single day had passed.”

These are two of my favorite verses in all of Scripture.  I suppose it’s because they let me know there is a plan that is bigger than what I can come up with, and also because it means that God has created me to succeed at whatever He has planned.  And if I will simply go along with that plan, then I can be assured of success.

But God doesn’t force His plans on us.  He encourages them.  He sets us up to succeed at them.  He has a plan.  It’s a plan that He knows can bring us the greatest fulfillment and make the greatest impact on this world.

– When Noah went along with God’s plan, his family and animals of every kind were rescued.

– When Moses went along with God’s plan, an entire nation was freed from slavery.

– When Gideon went along with God’s plan, an enemy army was defeated & God’s people were protected miraculously.

What would happen tomorrow in the world around you and me if today we determined in our hearts that we would seek to know God so intimately that we could learn His heart and hear His will?

What would happen tomorrow if today we believed that we are each a Divinely-designed masterpiece created for an eternal purpose?

What would happen tomorrow if today we got on-board with God’s plan for us to do the good things He set us up for before time began?

Perhaps human trafficking would be ended.  Perhaps orphans would be adopted into forever families.  Perhaps college scholarships would be funded through new foundations. Perhaps the hungry would be fed.  Perhaps a cure for a disease would be discovered.

What would happen tomorrow…?